If you’ve ever wanted a truly grab and go instrument for solar observation, this filter is for you. All you need is a small sheet of Baader AstroSolar® Film and a few other odds & ends and you are on your way. 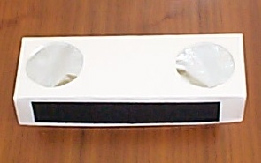 Draw another rectangle just a bit smaller (the “Back Piece”) as it will be fit inside the filter to hold the film in place. Cut both pieces from the poster board using scissors.
On both pieces, draw circles that are at least 1/8th inch smaller than the rings on the front of the binoculars. After these are cut, the front of the binoculars should not fit through the holes but rather the cardboard should fit on the front while not blocking too much of the full aperture of each objective. Use the razor knife to cut out these holes.
Using a ruler or other straightedge, fold the front piece along all of the lines such that you are creating a small box. Flatten the piece again for the next step.
Next, cut two squares from the Baader film. Use care to not touch the film with your hands – rather, keep the film
between two sheets of paper and cut the paper as well. The squares should be the full height of the inside of the front poster board.
Apply small pieces of two-sided tape to the front piece and around just one hole of the back piece as indicated below:

When not in use, store your filter with utmost care in a plastic storage container from the kitchen section of the department store.

Enjoy your two-eyed views of our nearest star! 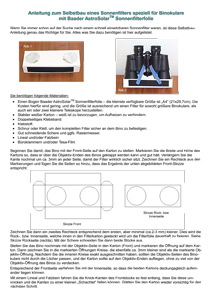 How to make your own solar filter for binoculars

Download AS-Folie-BinoFilter-e.pdf
Posted in How To – build your own solar filter.