For years our colleagues Martin Rietze and Michael Risch have been hunting for the next solar eclipse in the most remote places in the world.

See e.g. our previous blog posts, some on AstroSolar.com:

As already in 2017 Martin Rietze travelled alone to the Eclipse in Chile. Below you can see a short time-lapse video of the solar eclipse, in which you can see very impressively the shadow of the moon travelling over the earth. Here you can download the video of the Solar eclipse 2019 in FullHD.

Due to the extensive foreland landscape it was easy to find a remote and touristically unknown place in the backland of La Serena, only with some scattered groups of friendly local observers in the area. 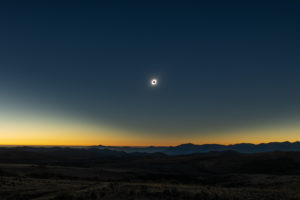 The goal was the view over the hills to the Pacific Ocean to see the approaching shadow. Therefore the observation site was at 1500m some km south of the central line. For focus settings before the eclipse and for partial phases Baader ASTF Filters (Price from € 65,-) were used.

Despite the already low sun a very clear picture could be seen, thanks to the perfect Atacama near sky.

Although this time the corona seemed somewhat weaker and the sun was spotless, the intense red chromosphere and the twilight colours of the horizon including the shadow run were even more impressive. 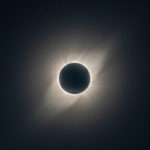 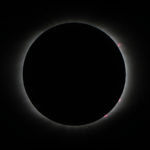 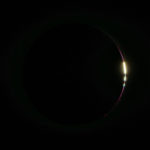 The psychological effect of the proximity to the horizon was also very clear. In contrast to zenith near eclipses this offers a much more dramatic effect, since landscape and dark sun are directly connected with each other.

Only then does the human brain have the possibility to scale the real distance and thus the size, a similar effect as at moon- and sunsets.
As a bonus, the brilliant southern starry sky of this region could also be admired.

It was also very astonishing that despite high winter the temperatures there rose to more than 20° and even the high 6000m peaks were virtually snow-free.
Due to the dry air, the cooling effect of the darkness was very noticeable.

After the eclipse there was still enough time to use the Chilean winter nights for some photos. The Milky Way and the Southern Cross were grateful targets for the light camera equipment of this Solar Eclipse expedition. 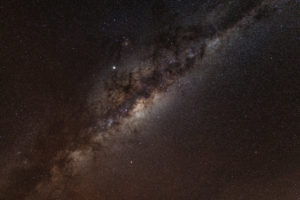 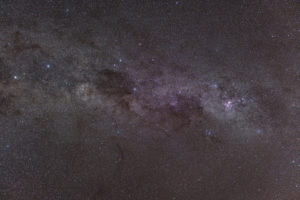 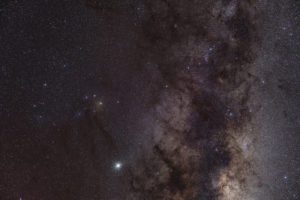